The next fruit we are talking about is kindness. Let’s first of all talk about what kindness is not. In Proverbs 18:8 it says: “The words of a talebearer are like tasty trifles, and they go down into the inmost body.” The Puritan Charles Bridges says: “No good results can arise from the spirit of the talebearer, because with him it is pure selfishness, without a principle beyond the love of sin for its own sake. He lives upon the scandal of the place, and makes it his hateful business to carry about tales, or slanders of his neighbors faults. Such reports are eagerly devoured, and the mischief-maker feeds with greedy appetite upon the fruit of his cruel indulgence. To him this may appear harmless play but if it draws no blood, and no outward hurt is shown, an internal and often incurable wound is inflicted.” How many times have we knowingly or unknowingly hurt someone with our speech? This is not showing kindness.

One last example of unkindness is in a man named Diotrephes. We read of him in the epistle of 3 John. His ambition in the church led him to evil speaking, to the breaking of fellowship and to excommunicating those who would not obey him. He is an example of selfishness, pride, disobedience and rebellion toward God. He did not have the heart of a servant but rather wanted to have a position of lording it over other members of the church. I am sure people like this exist in churches where their lack of kindness is a stumbling block to believers and unbelievers alike. 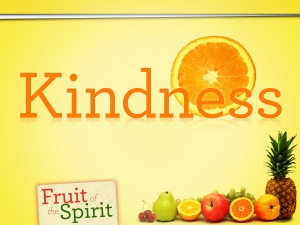 What is kindness? Jerry Bridges defines the word this way: “Kindness is a sincere desire for the happiness of others. It is an inner disposition created by the Holy Spirit, that causes us to be sensitive to the needs of others, either physical, emotional, or spiritual.” I will give you two examples of Biblical kindness though there are many more. Matthew 7:12 is what we often called the Golden Rule. Jesus said: “Therefore, whatever you want men to do to you, do also to them, for this is the Law and the Prophets.” What Jesus means here is that I am to treat you with kindness regardless of how you treat me. This is not a conditional promise. For example our kindness would be letting someone in in traffic, not letting our tempers flare when someone inconsiderately pulls in front of us, acting kind to people who are not particularly kind toward you.

One other example is found in Luke 10 in the parable of the Good Samaritan. In that parable Jesus speaks of a man in dire need, he had been robbed, beaten and left half dead. Who would show him kindness? Not a priest or a Levite. These were the upper classes among the Jews. The example of virtue which lower classes would follow. However they were neither kind nor merciful but the Samaritan was. Jesus was exposing the self righteous pride of many of the Jews of His day. Their pride led to unkindness. The Samaritan had nothing to be proud of. He was moved with compassion. He bound up the man’s wounds after having treated them with oil and wine. He then carried him to an inn for recovery and paid his expenses while recuperating. This is one example of how we show kindness to people without expecting anything in return. This is the Christ likeness we are to seek to imitate.