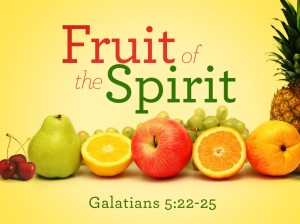 The fruit of the Spirit today is self control. Self control can be defined as the believer’s wall of defense against the sinful desires that wage war against his soul.

Charles Bridges observed that the person without self control is easy prey to Satan. He said: “He yields himself to the first assault of his ungoverned passions, offering no resistance…having no discipline over himself, temptation becomes the occasion of sin, and hurries him on to fearful lengths that he has not contemplated…Anger tends to murder. Unwatchfulness over lust plunges into adultery.”

Self control is necessary because we are at war with our sinful desires. James says “that each one is tempted when he is drawn away by his own desires and enticed.” In this verse the words translated drawn away picture a wild animal being lured from safety into a place where it can be attacked or captured. The next word in the verse enticed pictures a fish attracted by the glint of something in the water, altering course and closing its mouth on the juicy bait, only to find that it concealed the deadly hook. John Blanchard said: “Inwardly, man has the desire and the potential to sin; outwardly, he is surrounded by enticements, allurements, temptations. As long as he resists these, he is safe, but it is this consideration, this toying with the idea, this allowing of the outward attraction to occupy a place in his mind, that moves his toward the fateful moment.”

There are many things we could talk about in the area of self control but I would like to talk about our uncontrolled tempers. Many of us have temperaments where we tend to lash out at those who inconvenience us in some way. As godly people, however, we are to learn to control this tendency. In Proverbs 16:32 it reads, “He who is slow to anger is better than the mighty, and he who rules his spirit then he who takes a city.” Charles Bridges said: “The taking of a city is child’s play compared with this wrestling…That is the only battle of a day. This, the weary, unceasing conflict of a life.” 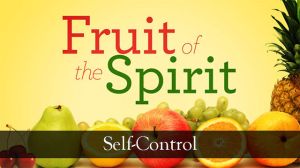 Although not harmful to others, other uncontrolled emotions such as resentment, bitterness and self pity may be more destructive to ourselves and to our relationship with God. All of our sinful inner emotions have a common focus on self.

In James 1:19, he says: “So then, my beloved brethren, let every man be swift to hear, slow to speak, slow to wrath.” Here are some other examples from Proverbs: “When words are many, sin is not absent, but he who holds his tongue is wise” (Proverbs 10:19). “A man of knowledge uses words with restraint, and a man of understanding is even-tempered” (Proverbs 17:27). “He who guards his mouth and his tongue keeps himself from calamity” (Proverbs 21:23).

To paraphrase this, we should remember that God gave us two ears and one mouth. We should listen more carefully before we speak. As Thomas Manton wrote: “Anger grows not by degrees like other passions, but at her birth she is in her full growth. The heat and fury of it is at first, therefore the best cure is deliberation.” Therefore, we should seek to bring every part of our life under the continuous control of the Holy Spirit.